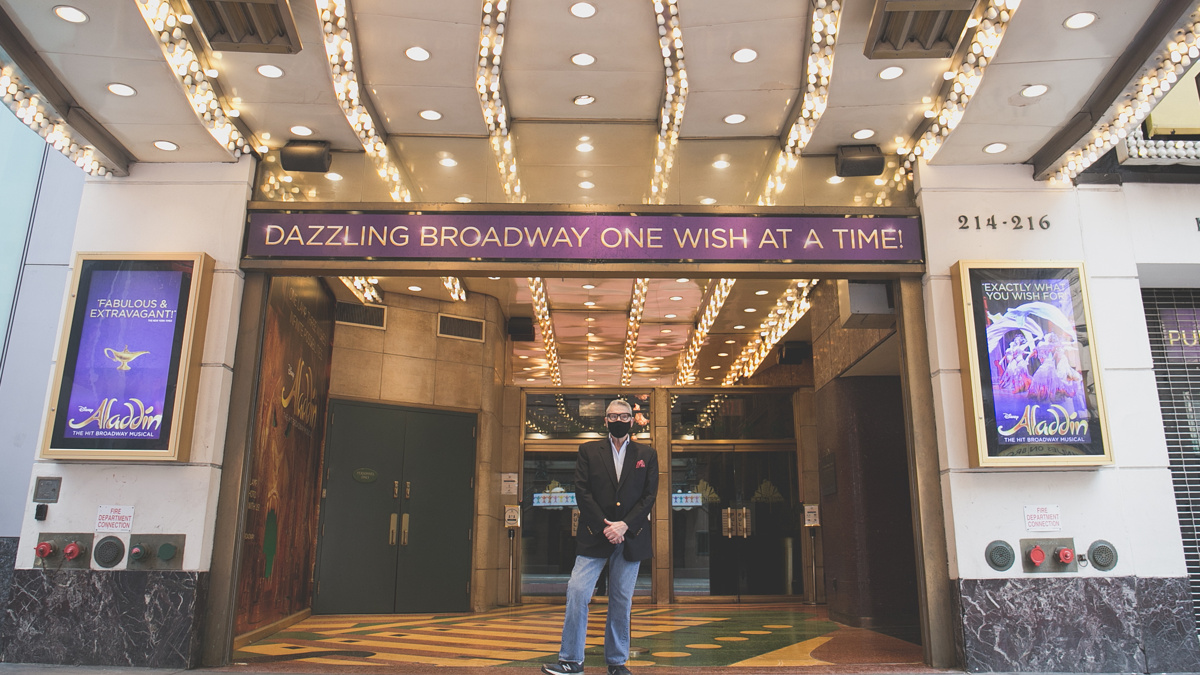 Living near the theater district during the Broadway shutdown, photographer and performer Matthew Stocke has been haunted walking past the empty palaces sitting in repose, waiting for the lights and stars to return. In this new Broadway.com photo feature, he reunites members of the theater community with their Broadway home #AwayFromHome.

For the past 28 years, Tony nominee Jonathan Freeman has been entwined with the character of Jafar. Having voiced the Aladdin villain in the 1992 animated feature, Freeman returned to the world of Agrabah to originate the role on Broadway in 2014 and has continued in the part ever since then. With three other Disney musicals to his name (Beauty and the Beast, Mary Poppins and The Little Mermaid) as well as many other credits on Broadway and beyond, Freeman always been a busy actor. During this season away from the New Amsterdam Theatre, Freeman has rediscovered the little joys in life as well as new passions. Here, he shares what is delighting him now and more.

“I have a house in Long Island that I’ve had for 28 years and I’ve been quarantined with my partner of 30 years. The really weird thing is that in those years, I have never spent more than three consecutive weeks here. Every single year, I have put in no fewer than a hundred daffodil bulbs, and I’ve never been here to see them grow and bud and bloom. To see them go through that cycle has been completely worth it. I reacquainted myself with some things like cooking and baking, and that was nice until it started to feel like it was all just too much. I was supposed to begin teaching on a more formal basis this year. I could never imagine myself teaching, to be honest. I did try it, at somebody’s recommendation, and I really enjoyed it. I have been teaching virtually online now. I never considered that teaching about performing arts, or writing books about it, were things that I would be good at, but I’ve been feeling lately that maybe I do want to. I’ve learned that it’s OK to not be constantly busy and challenging yourself—it’s made me reflective. Now it feels like a rehearsal for retirement, which is something that I never really entertained. I never imagined myself retiring…I miss the energy of the city and going to work. I’ve been working since I was a teenager, so to suddenly not be working is strange. I have to admit that it was a little mournful to me [to return to the New Amsterdam Theatre]. I’ve been connected to that theater longer than just Aladdin—I did Mary Poppins there as well. I’ve been going there for more than 10 years. I’m so familiar with it that it was really mind-bending for me. I was happy to be there, but I felt very uncomfortable in a way…I wish I had a crystal ball to gaze into in real life—just so I would know what we were heading toward. I think the hardest thing is the great unknown. Like when you’re waiting for a cake to come out of the oven, or for a baby to be born. It’s that anticipation and flutter in your body that you can’t quite kick. If I do find that crystal ball, I’ll happily ship it to everyone I know.”