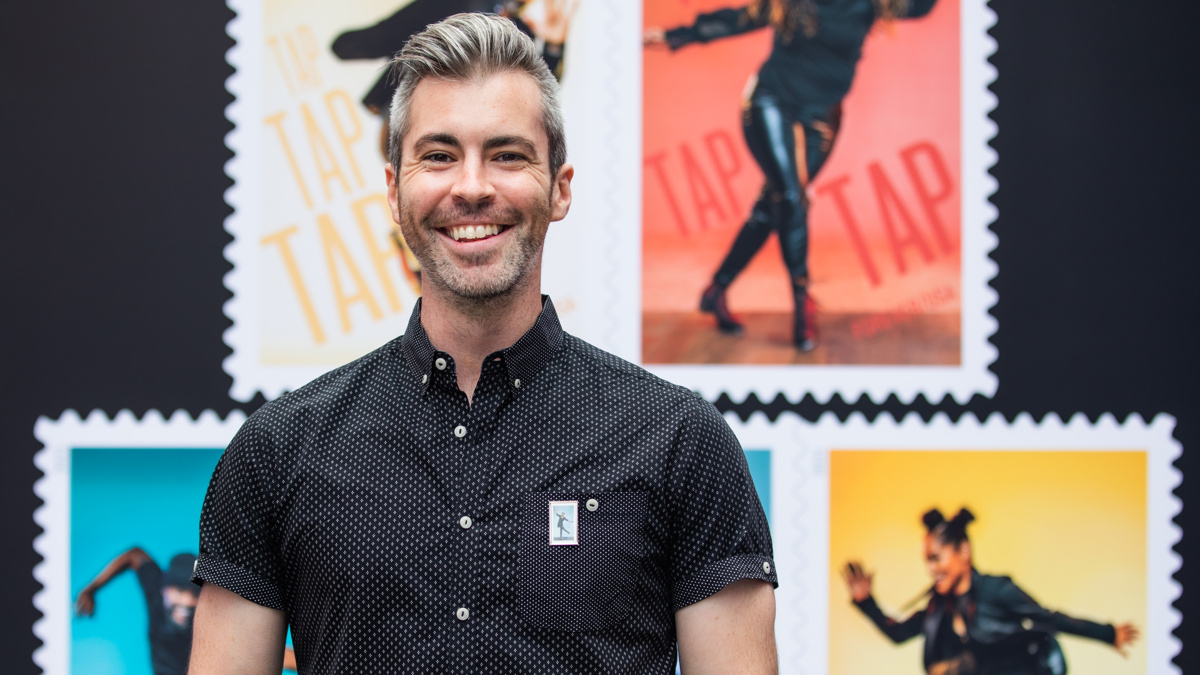 Broadway Photographer Matthew Murphy on Creating Tap Dance Stamps for the USPS: ‘They Really Let Me Run With It!’

Broadway photographer and frequent Broadway.com collaborator Matthew Murphy is going postal! Murphy is helping to deliver a new series of commemorative stamps for the United States Postal Service that celebrates tap dancing. The new stamps were unveiled in Times Square on July 10.

“The amazing thing about it for me was that I come from a family of tap dancers,” Murphy told Broadway.com. “My sister and brother-in-law are professional tap dancers, and my mom was a tap teacher. I’ve been immersed in [the dance] community for as long as I can remember.”

Murphy first became involved with the project in January 2020. “I got this email saying, ‘We’re looking to do a series about tap dance’ and that was the entire creative brief. When I got that email I was like, ‘If we’re going to do a tap project, we’re going to make it with the best tap dancers in the world!’ They really let me run with it.”

“It was so cool to just take a second, especially after this past year, and be proud of accomplishing something.”

Murphy dove in to what he loves best: working with dancers. “I actually photographed about 13 people for the series, but the thing with stamps is that they didn’t really know how many would be used or what photos would be chosen,” Murphy said. “We didn’t know if it would be only one person or if everyone would end up being used. There were a lot of uncertain elements, but we shot as much as we could.”

The five official stamps for the collection feature the dancers Dormeshia, Derick K. Grant, Ayodele Casel, Michela Marino Lerman and Max Pollak. Dormeshia’s Broadway credits include After Midnight and Bring in ‘Da Noise, Bring in ‘Da Funk, which also featured Grant. Casel was named one of the “biggest breakout stars of 2019” by The New York Times and Lerman’s newest project This Joint is Jumpin’ had its debut in the West End in 2017. Pollak is known for his solo show All In One.

Murphy worked with art director Ethel Kessler to create the final design, which he didn’t see in its final form until the unveiling ceremony. “Today, we are celebrating the American art form of tap dance with these vibrant stamps in the heart of Times Square as the Postal Service recognizes one of our nation’s greatest contributions to the world of dance,” said Lorraine G. Castellano, U.S. Postal Service New York district manager and executive in charge. Joining Castellano to dedicate the stamps were American Tap Dance Foundation Inc. Founding Artistic and Executive Director Tony Waag as well as tap dancers Casel, Lerman and Pollak.

“I really didn’t expect Saturday in Times Square to be such a big deal,” Murphy said. “I tried my best to actually take it all in. I gave a speech and I was super nervous about that. My husband, Ryan [Scott Oliver] was amazing and helped me get comfortable and was so supportive and excited. It wasn’t until after the speech that I was able to sit back down at my seat and just look at what was happening and be like, ‘Oh my God! This is so wild!’ There was a big banner with all the stamps on it behind me and stamp collectors were asking us to sign the official program. My mom, my husband and [colleague] Evan [Zimmerman] got to be there. It was so cool to just take a second, especially after this past year, and be proud of accomplishing something.”

The Tap Dance Forever Stamps are now available in panes of 20. They will always be equal in value to the current First-Class Mail 1‑ounce price.