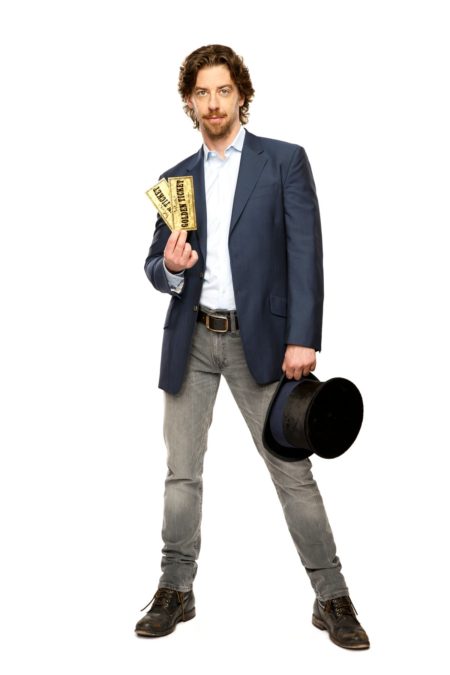 Christian Borle Will Lead Charlie and the Chocolate Factory

Two-time Tony winner Christian Borle is in gobstopping demand! The Something Rotten! star, who is going on to headline the Broadway revival of Falsettos this fall, will then take on the role of Willy Wonka in Charlie and the Chocolate Factory in the spring. Directed by Jack O’Brien and choreographed by Joshua Bergasse, the previously announced reworked transfer of London's hit tuner is set to begin previews in March 2017 at the Lunt-Fontanne Theatre, the current home of Finding Neverland.

This means that Borle could conceivably be up against himself for Best Actor in a Musical at the 2017 Tony Awards.

"Christian was the first—and in truth—perhaps the ONLY person I could imagine to create the role of Willy," O'Brien said in a statement. "His combination of child-like fantasy, edge, mystery, and sheer star power seemed destined for this role.”

Borle took home a Tony Award in 2015 for his performance as a leather-clad Will Shakespeare in Something Rotten!. He also won in 2012 for Peter and the Starcatcher. His additional credits include Legally Blonde, Mary Poppins and Spamalot on Broadway and NBC’s Smash, The Sound of Music Live! and Peter Pan Live! on screen.

Featuring a book by David Greig with music by Marc Shaiman and lyrics by Shaiman and Scott Wittman, the musical is based on Roald Dahl’s 1964 children’s book, Charlie and the Chocolate Factory. Willy Wonka, world famous inventor of the Everlasting Gobstopper, has just made an astonishing announcement. His marvelous—and mysterious—factory is opening its gates…to a lucky few. That includes young Charlie Bucket, whose life definitely needs sweetening. He and four other golden ticket winners will embark on a mesmerizing, life- changing journey through Wonka’s world of pure imagination. Get ready for chocolate waterfalls, exquisitely nutty squirrels and the great glass elevator, all to be revealed by Wonka's army of curious Oompa-Loompas.