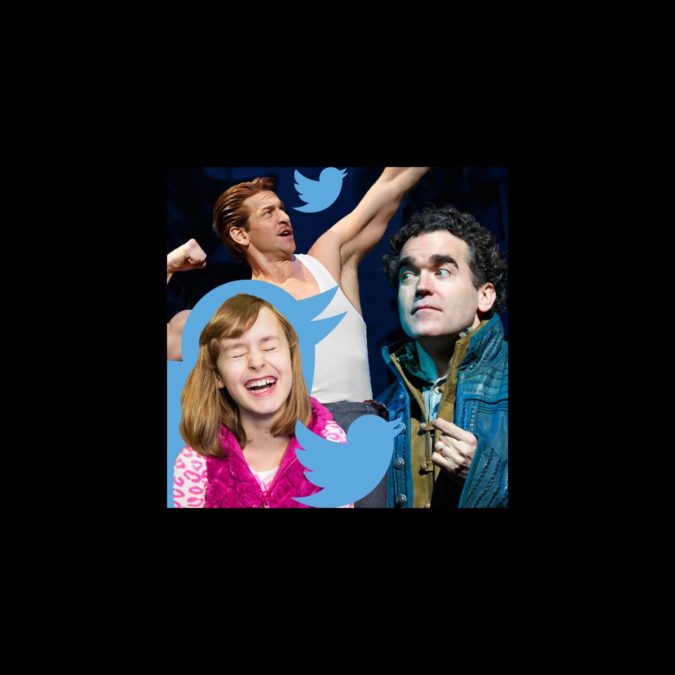 When Bruce Willis and Mary-Louise Parker announced the 2015 Tony Award nominations on the morning of April 28, they made a bunch of thrilled Broadway stars jump for joy in their PJs (or at least, that's how we imagine it happening). After calling their moms and texting their friends, many of the nominees jumped on Twitter to share their excitement with the world. Take a look at what some of our favorite nominated performers had to say on social media.

So excited I don't know what to do with myself! Must do cartwheels & handstands! Congrats @funhomemusical on Noms!! pic.twitter.com/kYceJYBjTB
— Sydney Lucas (@SydneyLucasNYC) April 28, 2015

Feeling grateful this morning and proud to join these 5 ladies and especially @KChenoweth as we honor our teacher FLORENCE BIRDWELL together
— Kelli O'Hara (@kelliohara) April 28, 2015

Wow. What an unbelievable honor! So proud of all the noms our production got, and to be part of the extraordinary community that is Bdway.
— Alex Sharp (@alexandersharp) April 28, 2015

turns out New Orleans is a wonderful place to wake up to wonderful news…congrats to all our family @funhomemusical pic.twitter.com/V3NVa3sJj9
— Michael Cerveris (@cerveris) April 28, 2015

I am so overwhelmed, humbled and thankful! What an incredible morning! Thanks to everyone for all the love and support! @OnTheTownNYC
— Tony Yazbeck (@TonyYazbeck) April 28, 2015

My heart is on fire. Sparkle sparkle poof poof KAAAHHH BAAAMM! Thank you for the gorgeous love my… https://t.co/WgBE8BMHMo
— Sarah Stiles (@Lulubellestiles) April 28, 2015


Even though they didn't recieve nods, these stars still cracked jokes and cheered on their co-stars on nomination day…


Woke up so happy and grateful. Despite nominations, I'm so proud to be in a show that is taking audiences on a beautiful journey. #puremagic
— Matthew Morrison (@Matt_Morrison) April 28, 2015


I wouldn't want anybody else representing @GigiOnBroadway than @Vicki_Clark. So happy for all the nominees!
— Corey Cott (@NapOnACott) April 28, 2015


Congrats to all this year's @TheTonyAwards nominees! Especially our own @HeidionBroadway's Elisabeth Moss! Enjoy the ride!
— Bryce Pinkham (@PinkhamBryce) April 28, 2015


Congrats to the nominees! And for all of us this season, let us take a page out of Coach Taylor's book: CLEAR EYES, FULL HEARTS, CANT LOSE!
— Sierra Boggess (@sierraboggess) April 28, 2015


Today I celebrate theater. Whether you were nominated or not, you get to do what you love everyday&share your gift with the world. #Broadway
— Ben thompson (@itsBenThompson) April 28, 2015


What a relief! I can stop working on that Tony acceptance speech I've been working on for the past 45 yrs
— Jackie Hoffman (@JackieHoffman16) April 28, 2015