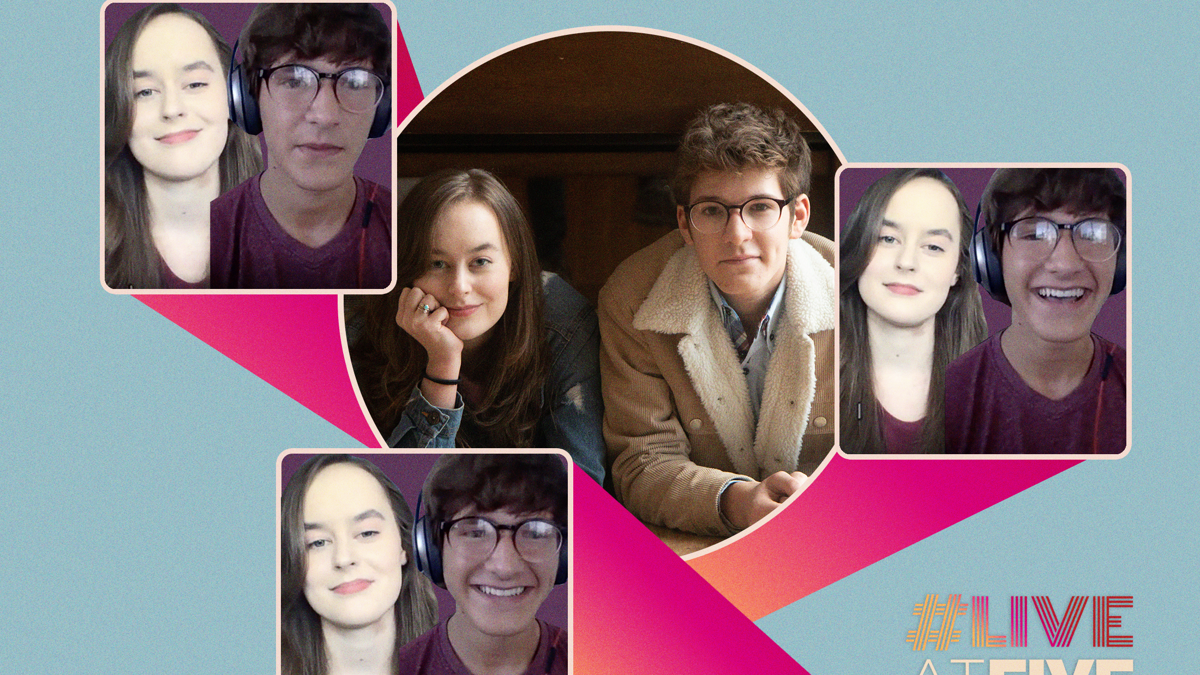 While most kids spend their middle school years playing after-school sports and navigating their hobbies and interests, Sydney Lucas and Eli Tokash were already living out their dreams by appearing on Broadway eight times a week. Lucas made her Broadway debut in Fun Home—and garnered a Tony nomination!—at just 11 years old. Tokash appeared in Pippin and Finding Neverland—all before turning 14. Now, the longtime friends are chatting about their experiences as child actors on Broadway in the new podcast Take A Bow. The duo joined Paul Wontorek on #LiveatFive: Home Edition to talk becoming podcast hosts and more.

Lucas and Tokash’s friendship goes back to 2013, when they first met at Christmas. “[Eli] was actually in A Christmas Story with my brother Jake,” Lucas said. “Eli was the alternate for Ralphie, so they shared that role. Then we went to middle school together. We were the first faces that we saw, and we clung to each other. We’ve just gotten closer with each other and depend on each other.”

Although they are co-hosts for Take a Bow, the idea to create a podcast was entirely Tokash’s. “I’ve gotten into podcasts in the past two years, I’d even listen to a math podcast on my way to the subway,” he said. “Then I got into sports podcasts and when Josh Lamon came out with his [Josh Swallows Broadway], I was like, ‘Whoa, this is something I could do.’ I was looking up the Broadway Podcast Network and realized that I had known Dori Berinstein, who founded it. So, I talked with her and posted something cryptic on Snapchat about something big being in the works. I always thought it would be awkward if it was just me, so when Sydney texted me about it, I asked if she would do it with me.”

Lucas and Tokash, now 17, are welcoming listeners into their lives. “We’re in a very unique position where we’ve been child actors, and now we’re teenage actors transitioning into adult actors,” Lucas said. “Audiences get to join us on this journey of navigating the two completely different worlds as we go through it.”

Since launching in May, several Broadway favorites including Andrew Barth Feldman, Caitlin Kinnunen and Ciara Renèe, have appeared on Take A Bow, and Lucas and Tokash are already thinking of ways to land a dream guest. “I’ve always said that either Ben Platt or Grant Gustin would be a really cool guest for me to have on,” Tokash said. “Kate McKinnon is up there, too. We have some ideas to do stuff with SNL people, hopefully. We’re just glad people are enjoying the episodes so far.”

Listen to the full #LiveatFive: Home Edition episode below!